A truck bomb in Somalia's capital, Mogadishu, killed at least 79 people today. More than 100 were injured. It was the worst attack in the city in two years, and the country's president has placed the blame on the Islamist group al-Shabab.
(SOUNDBITE OF ARCHIVED RECORDING)
PRESIDENT MOHAMED ABDULLAHI MOHAMED: (Through interpreter) What they do is kill Somali citizens, kill Somali children, and with them, all the hope for the future of this nation.
MCCAMMON: NPR's Eyder Peralta has been following this story from his base in Nairobi and joins us now.
Hello, Eyder.
EYDER PERALTA, BYLINE: Hey, Sarah.
MCCAMMON: So tell us what we know. Where was this truck detonated, first of all?
PERALTA: Yeah. So this happened at one of the main entry points to Mogadishu, and it happened at 7:30 in the morning. And that's important because the workweek begins on Saturday in Somalia, so people — they were out on the streets. They were trying to get to work, to school.
And so when this truck bomb was detonated, it just caused a lot of carnage. Footage from the scene showed one bus, which was carrying a group of university students — it was splattered with blood. Some of the students' belongings, their bags, their books ended up on the roadside soaked in blood.
Dozens were killed, dozens were injured. And as you said, you know, this is the deadliest bombing since October of 2017, when a similar type of device detonated in another busy intersection. And that one killed almost 600 people. 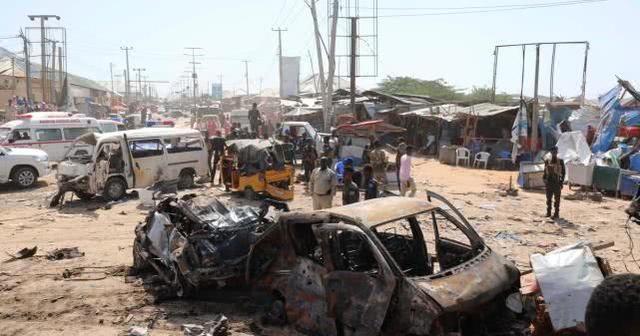 MCCAMMON: And what's known about the motivation for this attack?
PERALTA: I mean, it's worth noting that al-Shabab, which is linked to al-Qaida, has not taken responsibility for the attack. And sometimes they don't, especially with attacks like these which kill so many civilians. But the government — they are obviously pinning the blame on them.
And this period of time is of particular interest to al-Shabab. Somalia is going into an election year. And in the past, the country has been so insecure that an elite group of clan leaders elect the government.
This coming year, that was supposed to change. For the first time in 50 years, Somalia is p﻿reparing for an election where everyone is supposed to vote. And al-Shabab — that's not what they want. They don't want the liberal democracy to take hold in Somalia. They want an extremist version of Islamic law. And, you know, they've been using this insurrection to make Somalia ungovernable, to keep what they see as a Western-backed style of government from t﻿a﻿king hold in the country.
MCCAMMON: And, Eyder, if you would put this in context for us, as you mentioned, Somalia saw hundreds of people killed in bombings just a couple of years ago. What's been happening since then?
PERALTA: It hasn't stopped. I think, you know, one of the things that this attack tells you is that al-Shabab — if al-Shabab was indeed behind this attack — is able to get past some of the security perimeters that had been set up in Mogadishu. And Mogadishu for a while had been somewhat secure. And that just seems to be crumbling over the past couple of years.
MCCAMMON: That's NPR's Eyder Peralta reporting from Nairobi. Thank you.
PERALTA: Thank you, Sarah.